Friday I was out surfing at the west coast of Jutland. The prologue took place at a fully exposed beach with a nasty shore-break and ended by me flying and landing head first in the gravel. While I'm sure the beachwalkers found the incident amusing, I was happy for my helmet.

The surfing continued at the Fish Factory where we had one super surf session. For once I found I was really able to control the my surf kayak, changing direction at will and getting some super long parallel runs. 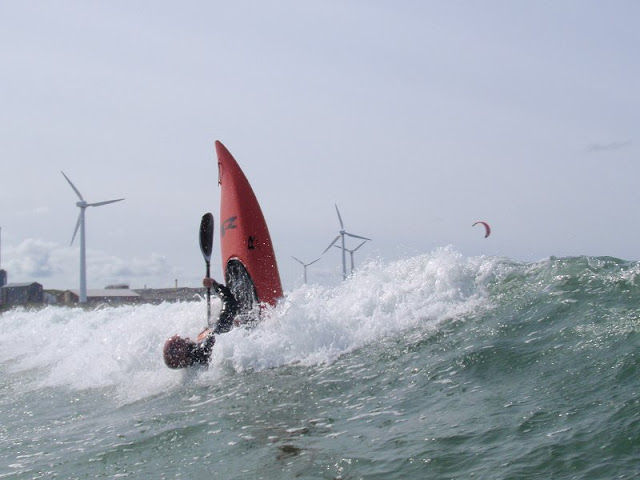 Last summer I got hold of a second-hand Lendal Kinetik Wing paddle and I've been using it ever since for surfing. As you might know the Kinetik is of a hybrid flat/wing design. It is supposed to be usable for the wing stroke and steering strokes. Before I give my verdict I have to shorten the paddle. One thing for sure - it lacks the bite and grip of my normal wing.

Speaking wing paddles, I recently switched my Bracsa IV with a Lettmann Warp. First I planned to only use the Warp for sea kayaking but after 3 minutes in my Supersonic I was sold. I'll write an entry on the paddle after this year's Tour de Gudenå (4 weeks now)
.
Posted by Unknown at 4:24 PM